Exercise Induced Collapse (EIC) is a canine genetic disorder that leads to loss of muscle control following periods of extreme exercise.  Episodes generally occur after 5-25 minutes of excessive activity that can include actively running for extended periods of time.  Episode severity ranges between different dogs and often begins with a form of rocking followed by weakening of the hind limbs and eventual collapse.  Attacks are typically brief (less than 20 minutes) and dogs tend to recover.  In a limited number of cases, episodes can be fatal.  Affected dogs begin to show symptoms from a couple of months to 3 years of age and are more susceptible at an age when more intensive training begins.

ROGRESSIVE RETINAL ATROPHY ROD-CONE DYSPLASIA 3 (PRA-RCD3) Progressive retinal atrophy (PRA) is a category of different progressive conditions leading to retinal atrophy and potential blindness. Cardigan Welsh Corgi, Pembroke Welsh Corgi, Chinese Crested and Pomeranian breeds can be affected by a particular type of PRA known as PRA-RCD3. Disease symptoms can present as early as 1 year old or earlier and are typically observed during an eye exam. The rod cells of the eye which are responsible for vision in low-light (night time) show gradual deterioration and the dog rapidly exhibits “night blindness” which is typically seen as a gradual inability for the dog to go outside at night due to loss of night vision. At approximately 2-3 years of age, the dog’s cone cells begin to degenerate. The disease continues to progress leading to a loss of color vision and vision in bright light and eventually results in complete blindness. 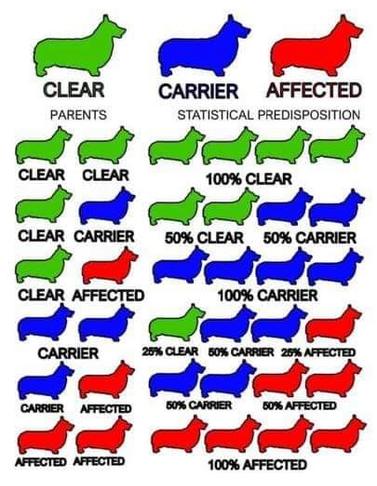 Degenerative Myelopathy (DM) is a progressive disease of the spinal cord in older dogs. The disease has an insidious onset typically between 8 and 14 years of age. It begins with a loss of coordination (ataxia) in the hind limbs. The affected dog will wobble when walking, knuckle over or drag the feet. This can first occur in one hind limb and then affect the other. As the disease progresses, the limbs become weak and the dog begins to buckle and has difficulty standing. The weakness gets progressively worse until the dog is unable to walk. The clinical course can range from 6 months to 1 year before dogs become paraplegic. If signs progress for a longer period of time, loss of urinary and fecal continence may occur and eventually weakness will develop in the front limbs. Another key feature of DM is that it is not a painful disease.

Below is an illustration on how the genetic traits are passed down. All of our dogs are tested clear or carrier, so we will never produce an affected puppy.

Disease descriptions were copied straight from the website Gensoldx.com, where all our testing is done. Copies of testing certificates are available at any time on any of our breeding dogs.

Healthy Dogs and Puppies Are A Top Priority For Us!! In Todays Day And Age There Shouldn't Be Any Reason Or Excuse To Not Test For These Diseases. Below Is A Description Of Each Of The Genetic Diseases We Test For. A Copy Of All Testing Results Is Pictured Below For Each Dog

Von Willebrand disease (vWD1) is a genetic disorder that prevents normal blood clotting and can cause extended bleeding following injury. The disorder results from a deficiency or lack of sufficient von Willebrand factor (vWf) which functions as a binding protein during blood clotting. Three types of vWD have been identified in dogs to date and are known as vWD type 1, 2 and 3. Within these three types there are five different genetic mutations that are currently known that lead to canine vWD. Von Willebrand’s disease type 1 (VWD1) results in reduction in normal levels of vWf to approximately 5-10% of normal. Since some vWf is produced in dogs homozygous for the VWD1 mutation, this form of the disorder is considered to be less serious than type 2 and 3. The mutation (G>A substitution) has variable penetrance and is recessive requiring two copies of the mutation in affected dogs. Typical symptoms of the disease encompass excessive or abnormal bleeding following injury or the presence of blood in various bodily secretions (urine, feces, etc.).